Honouring Aaron Berhane and His Legacy at George Brown College

Please Note: A version of this announcement has been translated into Tigrinya.
Read the announcement about Aaron Berhane in Tigrinya 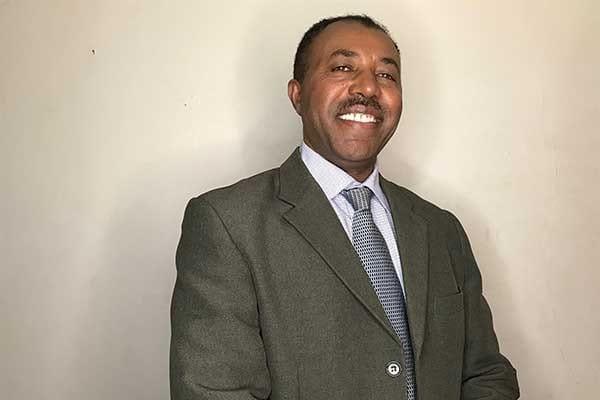 George Brown College is pleased to announce two initiatives to honour the remarkable life of Aaron Berhane, award-winning journalist, tireless advocate for freedom of expression, and member of faculty. Sadly, Aaron passed away in Toronto in May of this year at the age of 51.

Aaron co-founded Eritrea’s first independent newspaper but was forced to flee to Canada in 2001 after the government shut down several media outlets and arrested journalists. His wife and children finally escaped from Eritrea and joined him in 2010. In Canada he earned a Master’s degree from Ryerson University, published a Toronto-based newspaper in Tigrinya and English about Eritrean issues, and volunteered with PEN Canada. In 2004, Aaron became the PEN Canada Writer-in-Residence at George Brown College, which led to a teaching position. In 2019, he received Humber College’s PEN Writer-in-Residence fellowship and wrote his memoirs, detailing his harrowing escape from Eritrea. He then became the Chair of the Writers-in-Exile program at PEN Canada. Through all of this, Aaron remained humble, always quick to direct attention from his own accomplishments toward the plight of the many journalists currently threatened or imprisoned.

After his sudden passing, family, friends and colleagues came together to create initiatives to honour Aaron’s legacy. A scholarship was created to help students at George Brown College who need financial assistance to complete their education. Contributions were generously matched by long-time George Brown College donor, Vincent Thomson, with the Aaron Berhane Memorial Student Scholarship raising over $20,000 to date. Thomson remarked, “The work that Aaron did in his lifetime is inspiring. Supporting the next generation of leaders with a scholarship in his name will honour Aaron’s passion and dedication to freedom of expression.”

The Aaron Berhane Memorial Student Scholarship will start supporting George Brown College students enrolled in the Winter 2022 semester. Preference will be given to students who are first-generation post-secondary students, and refugees or immigrants to Canada. The hope is to support students who are active in their community, as was Aaron.

“Our Father stopped at nothing to share the stories of those people who were silenced. We want his legacy to continue uplifting the voices and actions of those in our community who need it most.” said Freweini Berhane, Aaron's daughter.

Commenting on the scholarship, George Brown College Foundation President, Dr. Cindy Gouveia said, “We feel privileged to have worked with Aaron’s family and friends, as well as with Vincent Thomson, to create an award that honours the life and work of Aaron Berhane. Through this scholarship, George Brown College students will receive support and encouragement to achieve their dreams.”

In a second initiative, the Aaron Berhane Educational Pilot Project, George Brown College will sponsor enrollment in English as a Second Language (ESL) courses for some members of PEN Canada’s Writers-in-Exile group. Refugee writers will receive extensive ESL training at levels beyond existing government-funded programs. The goal of the Aaron Berhane Educational Pilot Project is to reduce the language barrier, opening the way to more professional work in Canada. Participants will be able to progress from their current fluency through to the eighth level of the certificate ESL program.

Tax receipts will be issued by the Foundation and 100% of your donation will go directly to support the scholarship.

For more information, please contact Gabriella Goutam, Development Officer at the George Brown College Foundation, at (416) 415-5000 ext. 3289 or at Gabriella.Goutam@georgebrown.ca.